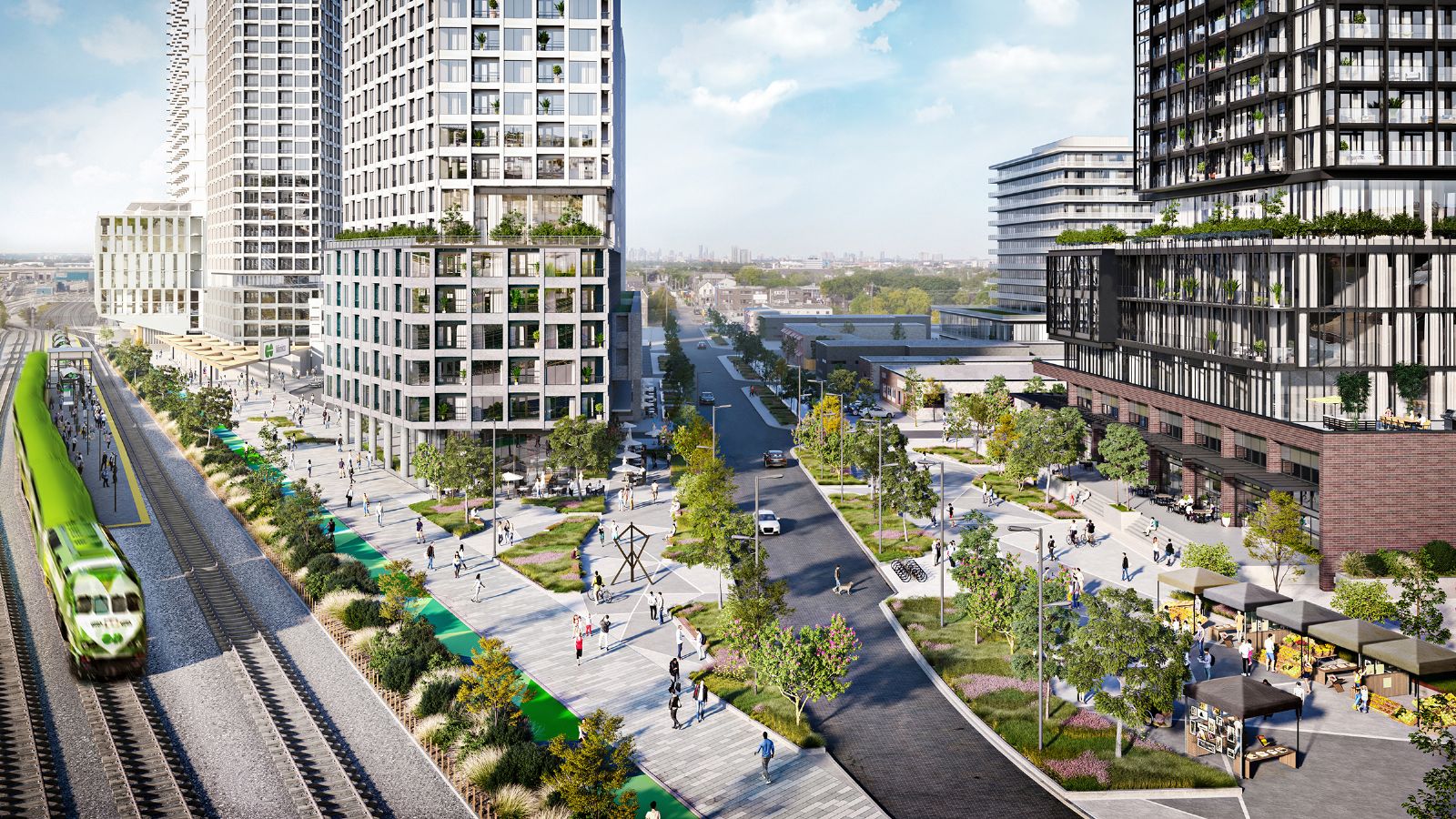 Metrolinx and Vandyk Properties are ushering in a whole new era in Toronto life. At the new Grand Central Mimico project, there will be a modern restored GO train station that will become an integral part of the area. The daily passenger numbers at Mimico are expected to triple over the next few years, and residents of the Grand Central Mimico will be able to travel anywhere in the city within minutes. Conveniently located just two stops from Union Station in downtown Toronto, the city's busiest and most important transit hub, and one-stop from Exhibition Place, where the metro, GO and U-Express trains meet to the airport; as a result, a large interchange hub will appear. On the opposite side in just 10 minutes GO train will take you into the Port Credit area where another transportation hub connecting GO and Hurontario LRT coming by 2023. Grand Central Mimico is a future upmarket area just 15 minutes from the city center and at the same time close to beautiful parks and the Lake Ontario waterfront. In our opinion, investors who purchase apartments at the very beginning of the development of the region will receive excellent dividends in the future. Don't miss your chance!

But that's not all !! Just a few days ago, another project received preliminary approval. It will be built a little east of GRAND CENTRAL MIMICO and does not even have a name yet, but this will be the largest master-planned community ever built in GTA, Here you can read about the city's plans for further area development

Our Video about this project

Grand Central Mimico is a master-planned mixed-use community that will feature retail and office space. Vandyk (the developer) has partnered with Metrolinx and Mimico Go will be directly connected to the building. This means you will have direct access to Mimico GO Station.

Mimico is located at 23 Buckingham St in Etobicoke. Etobicoke is an emerging area referred to as “The New Toronto.” Growth in this area is unprecedented and there is still lots of potential for growth. The condo is 39 stories high consisting of 373 suites.

What makes this investment worthwhile is its community. Master-planned communities have gained popularity for the convenience it offers to most lifestyles!

In partnership with Metrolinx, Vandyk Properties brings a new era of connected living to Toronto. Vandyk’s newest master-planned community, Grand Central Mimico, will see a modern reconstruction of the Mimico GO Station integrated seamlessly into the community. Daily ridership at Grand Central Mimico is expected to increase three-fold in the next 10 years, and residents of GCM will benefit most from this unprecedented access to highly connected transit. This state-of-the-art station makes it easier and faster to get riders to where they need to be. Conveniently located only two stops away from Union Station , the city’s busiest and most significant transit hub, and one stop away from Exhibition Station , the future south-west terminus of the Ontario Line. Just minutes to the downtown core, Grand Central Mimico is the GTA’s greatest transit redevelopment story.

TRANSPORTATION - Etobicoke is well connected to the many roads and highways that make up the GTA’s primary transportation system. A simple grid street layout makes access to Highways easy. Residents will enjoy a 5-minute drive to the Gardiner Expressway, which takes you straight downtown, providing easy paths into the core, and making commutes a breeze.

LOCATION - a burgeoning area for densification and development. With a convenient connection to transit, Hurontario is an enticing location for a number of groups from young professionals to students and families.

WHY GRAND CENTRAL - Younger residents are increasingly finding the Etobicoke way of life to be very attractive, and are moving into the area in droves. Companies in the tech sector are choosing to build headquarters and offices in the area, retooling old industrial buildings and bringing new energy to older neighborhoods. These offices and production facilities are bringing new jobs to the area, and enticing young professionals to settle in the area.

The mixed use community is comprised of: